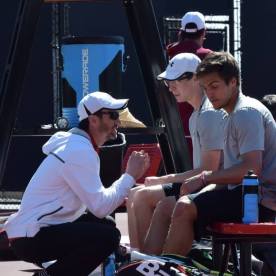 “Coach Pollock has been an integral part of our success these past two years,” said head coach Roeland Brateanu. “He is a fantastic coach, a great recruiter and, most importantly, he really cares about the wellbeing and the success of our student-athletes both on and off the court.”

Pollock joined the Ute coaching staff in the summer of 2014 after a year and a half as an assistant coach at BYU. In his first year, Pollock coached the Utes during a rebuilding year to an 11-13 record, but saw a dramatic improvement this past year, when the Utes improved to 17-10, earning the program’s best record since 1988.

“I’m extremely grateful to Coach Brateanu for the trust that he has placed in me to work with and develop our student-athletes. We have developed a strong partnership over the past 2 years and share a clear vision of where we want this program to be and how we want to get it there,” said Pollock. “Being recognized with a new title at one of the premier athletics departments in the country is definitely an honor and I look forward to the responsibilities that accompany it. I’m excited to get the guys back in the fall to continue their development and set the bar higher for the future of Utah tennis. GO UTES!”