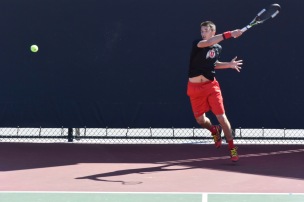 Salt Lake City, UT – On Tuesday, the final rankings for the Mountain Region were released.

Freshman David Micevski (pictured), finished the year ranked inside the top 5 in singles.

Micevski was the highest ranked Ute and one of three Utes to be ranked in the top 20 in the region. Micevski won his first seven matches in the spring and finished with a 17-5 singles record, 5-2 in Pac-12 action, mainly from the No. 2 position.

Freshman Dan Little finished the year ranked No. 16. The freshman sensation started the year off spectacularly with an appearance in the finals of the ITA Mountain Region Championships in October, but a nagging injury limited the Brit in competition for the Utes the remainder of the season.

Dan Little and Matt Cowley finished the year ranked N0. 90 in the nation and No. 3 in the region in doubles play.