“Benjamin is a very intelligent young man who loves the game of tennis,” said head coach Roeland Brateanu. “He’ll be a great addition to our team.”

Heck, a 4-star recruit, has ranked in the top 10 in Texas throughout every age division in juniors and currently ranks No. 114 in the country according to tennisrecruiting.net. He is currently  11-4 against other 4-star recruits.

“It is an honor to be a part of this school and tennis team,” said Heck. “The school has been accelerating in its development and continues to progress at a very high rate. This is mirrored by the tennis team as it is very young and is challenging the top 10 colleges in the nation. Clearly, the school is on the right track and I believe this will help me overcome any challenges I may face in the future.” 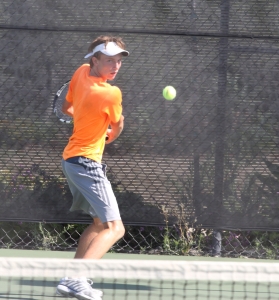 Heck ranked top 10 in every age division in Texas

He will graduate top of his class from Chaparral Star Academy and will be the Valedictorian speaker at next month’s graduation ceremony. He aspires to obtain a bachelor’s degree in Biomechanical Engineering while at the U.

Also joining the Utes is Jacob Lapkin from Grand Junction, Colorado. Lapkin has had a brief stint as the No. 1 ranked player in Colorado, but is currently ranked No. 4. In high school he has been nominated to the All-State team both academically and athletically all four years.

“I chose Utah because the school has a growing reputation and continues to improve in every aspect academically and in athletics,” according to Lapkin.

“Jacob is a very talented and gifted athlete with a tremendous team spirit,” said Coach Brateanu. “In the right environment and with the right type of training, we think that Jacob will be a great player for us.”

Lapkin and Heck are set to join the team in the fall of 2016. Welcome to the Ute family Jacob and Benjamin!