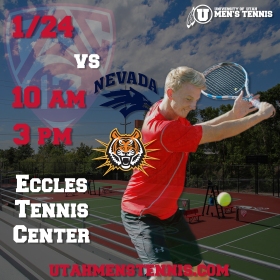 Salt Lake City, UT – Fresh off a 3-0 road trip in Hawaii, featuring a win over the 55th ranked San Francisco Dons, the University of Utah men’s tennis team (3-0) returns to Salt Lake City for its home opener on Sunday, January 24. The Utes will match up against the Nevada Wolfpack (1-0) at 10 a.m. and the Idaho State Bengals (0-0) at 3 p.m. Both matches will be played the the Eccles Tennis Center. As always, admission is free and fans can park in the lot East of Guardsman way free of charge. Live stats are available here.

“We are excited for our home opener this Sunday,” said head coach Roeland Brateanu, “Nevada and Idaho State are two good teams, and I look forward to the challenges they pose to our team.”

University of Nevada
The Wolfpack opened its season last week with a 6-1 win at UC Riverside (0-1). Nevada will play BYU (3-0) on Saturday before contesting the Utes. Last year, Nevada finished  with a 9-16 record but made a late season run to the finals of the Mountain West Conference Championship. Senior Ryan Andrada returns to play for the Wolfpack at No. 1 singles. Last season, he lead the team with 20 wins, primarily at No. 3 and No. 4 singles. Andrada is one of four seniors on the team.

Senior Jamey Swiggart transferred to Utah after his sophomore year

Idaho State
Idaho State will begin its season on Sunday versus Utah. The Bengals have just two players returning from last year’s team, which finished 6-11 overall with a 4-8 record in conference play. The Bengals are Utah senior Jamey Swiggart‘s  former team. Swiggart played for Idaho State during his freshman and sophomore years, anchoring the Bengals at No. 1 singles during the 2014 season before transferring to Utah. Jamey looks forward to facing his old squad: “It’s a fairly new team, but I am excited to play them and see familiar faces. I think it will be a good challenge.”

A link to live scoring will be posted on this page before the matches on Sunday. Check this website and our social media pages on Facebook, Twitter, and Instagram to stay up to date with Utah tennis news and action.