Honolulu, HI –The University of Utah men’s tennis team (0-0) will begin its 2016 campaign in Honolulu, Hawaii. The Utes are set to play No. 55 San Francisco, Hawaii, and Sacramento State this weekend. All dual matches will be held at the University of Hawaii Tennis Complex. 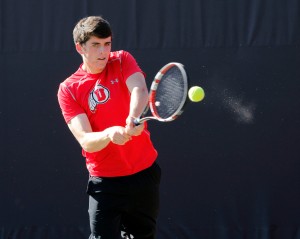 The Utes look to continue their momentum from individual play in the fall to the dual match season. Freshman Dan Little highlighted fall play for the Utes, reaching the finals 2015 ITA Regional Championships in Albuquerque, New Mexico.

Utah starts the season with three singles players in the top 20 and three doubles teams in the top 10 of the regional rankings. Dan Little is ranked No. 3 in the region, after posting and impressive 12-3 singles record in the fall. Senior Matt Cowley holds a No. 7 ranking, while Junior Parker McGuiness checks in at No. 13.

In his second season as head coach, Roeland Brateanu anticipates a strong year from this young team: “We have a very exciting and young team, full of talent. My expectation from this group is to put us in a position to make the NCAA tournament. I think we have to capacity, talent, and depth to do it.”

No. 55 San Francisco
Utah will square off with the 55th ranked San Francisco Dons (0-0) on Friday, Jan. 15 at 10 am (HT). USF’s roster is comprised of of four seniors, two juniors, two sophomores and three freshmen. Last year, the dons posted a 14-9 overall record, reaching the semifinals of the West Coast Conference Tournament before falling to No. 41 Pepperdine.

Hawaii
The Utes face the Hawaii Rainbow Warriors on Sunday, Jan. 17 at 12 pm (HT). Hawaii is represented by a young squad, made up of only freshmen, sophomores,  and juniors. The Rainbow Warriors will play San Francisco and Sacramento State this weekend before contesting Utah. Hawaii posted a 6-14 overall record last season, finishing last in the Big West Conference.

Sacramento State
Utah closes play in Honolulu against the Sacramento State Hornets on Monday at 11 am (HT). The Hornets were picked to finish fourth out of twelve teams in the Big Sky Conference this season in the Big Sky Preseason Coaches Poll. Sacramento state ended last season with a 10-14 overall record, 7-4 in Big Sky play. Two seniors, two sophomores, and seven freshman will compete for the hornets this season.