“I can’t begin to tell you how excited coach Pollock and I are right now,” said Brateanu. “Joe is a fantastic player; a born winner, a great competitor who loves the game of tennis. He’s a great fit for our team and program.”

Woolley, who just turned 17 a couple of months ago,  has ranked as high as No. 1 in Great Britain in the U16 and U18 age divisions and has won the British AEGON Masters Series all in the same year. Last year, at age 16 he reached the finals of the Sheffield British tour and qualified for 4 main draw Futures events. In September of this year, on his way to reaching the semifinals at the Cambridge British Tour Event, he beat former Duke Blue Devil Torsten Wietoska (career high No. 533 ATP). Woolley lost in 3 tough sets to world’s No. 383 Marcus Willis and is currently ranked No. 56 in the British Open Tennis Rankings. 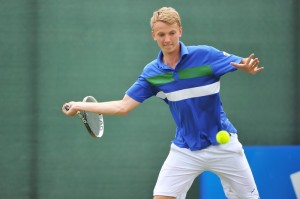 Woolley in action at the AEGON Nottingham Challenge in 2013

“It feels great to be a Ute and to be part of such an amazing university with such an amazing team and coaches,” expressed Woolley. “I had the choice of two great universities, but after visiting Utah and meeting the team I really felt that it was the right place for me to not only help the team, but to improve my tennis. GO UTES!”

Woolley joins a loaded recruiting class for the Utes, after Freddie McGeehan, Dan Little and David Micevski already committed to playing for the Utes.

“It’s as if Christmas has come early this year,” said Brateanu. “This is the best recruiting class we have had in a very long time. We have an exciting group of young men this year, a great staff, we are building a state-of-the-art outdoor tennis center and we now add a very strong recruiting class for next year. It’s a very exciting time to be a Ute!”