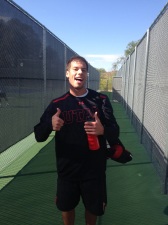 The University of Utah men’s tennis team recently received the academic reports for it’s players from the Spring 2014 semester. Four Utes were awarded academic honors from the University and athletic department.

Graduating Senior Ben Tasevac made the Athletics Academic Honor Role (GPA 3.00 and above) and the University of Utah Dean’s List (GPA 3.5 and above). Tasevac recorded a 3.712 GPA during last semester, and he graduated with a degree in Exercise and Sports Science. Ben also won the team’s Most Academic Award for the second consecutive year.